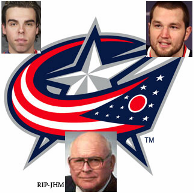 As the NHL finishes up the Stanley Cup Playoffs, the Blue Jackets are once again watching on their televisions. However, this off-season has already been teeming with news and rumors and it looks like it will continue to get more interesting as the off-season progresses. Here is what’s been happening this off-season so far.

The Blue Jackets lost their founder and most faithful supporter, John H. McConnell on April 25th, 2008. John H. McConnell was the majority owner, chairman and governor of the Columbus Blue Jackets. He worked hard to petition the city to get a professional hockey franchise. McConnell graduated from Michigan State University in 1949 and went on to found Worthington Industries in 1955 using his car as collateral to get a loan. Worthington Industries currently does over $3 billion in business a year. With his fortune, McConnell helped to transform Columbus as a philanthropist and businessman. He not only brought sports teams to Columbus, but he also created the McConnell Heart Hospital and Health Centers. He was also the architect behind numerous foundations and charities designed to help people in and around the city. After his death a dinner was held to celebrate his life and legacy. Blue Jackets captain Rick Nash announced the creation of the John H. McConnell Scholarship Fund. The scholarship will be awarded to central Ohio students who show the leadership that McConnell was so famous for. A “JHM” patch will be worn on the back of every Blue Jacket jersey this season.

The 2008 World Championships are well underway in Halifax, Quebec. A number of Blue Jackets players are taking part in the tournament including Rick Nash, Jason Chimera and Pascal LeClaire playing for Team Canada, with Ken Hitchcock behind the bench. Jan Hejda and Jiri Novotny are also playing for Team Czech Republic. Rick Nash continued where he left off at the end of the NHL season, racking up three goals, including a late winner against Norway. He also assisted on a Danny Heatley game-winning goal. Goaltender Pascal LeClaire is 3-0 throughout the tournament, notching one shutout for Canada. Team Canada will face Sweden in the semifinals while Russia will face Finland in the opposing bracket. Jan Hejda and Jiri Novotny had an uneventful tournament as the Czechs were beaten by Sweden in the quarterfinals. Hejda had one goal and Novotny lit the lamp only once while adding one assist.

The Blue Jackets sixth pick in the 2007 entry draft, Allen York was named the top goaltender at the 2008 RBC Cup. York recorded a 4-1-0 record with a .960 save percentage while playing for the Camrose Kodiaks, a Canadian National Junior team based out of Alberta. At only 18 years old, York posted an 11-3-0 record in 14 games this season on his way to the RBC Cup. His overall record in the Alberta league is 47-9-3 with 5 shutouts. With stats like these, Allen York will be on the Blue Jackets radar as he moves up through the juniors, to Syracuse and hopefully, the Blue Jackets.

- Jan Hejda signed a 3-year, $6 million dollar deal. With Hejda signed on, the Jackets still have more that $15 million to spend on new talent, minus the money or talent they will acquire with trades.

- Rick Nash will be on the cover of the new NHL 2K9 video game.

- The Blue Jackets are rumored to go after San Jose star center Daniel Briere on draft day, a potential move to get another proven star that is desperately needed for the organization.

Walsh Tapes just Chips off the Iceberg that is SpyGate

Walsh Tapes just Chips off the Iceberg that is SpyGate
Posted by Steve Patterson at 11:17 PM 0 comments