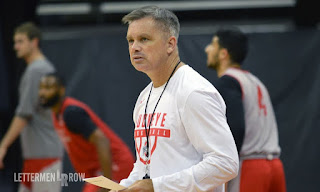 The Ohio State University picked up Chris Holtmann from Butler just a few seasons ago and is finally ready to dominate under his leadership. Holtmann grew up in Nicholasville KY and played basketball for Taylor University. As a senior at Taylor, he was an All-American award receipient for the NAIA. He quickly jumped into coaching as a graduate for Taylor U. He moved on to Geneva College after a season and then returned to Taylor in 1999. He really got recognized at Gardner-Webb in 2002 and coached for their program for 5 years. A couple of years in Ohio and then back to Gardner-Webb as their head coach. In 2013 he lead them to their first Division I postseason ever. He was the coach of the year for that achievement.


2019 is Chris Holtmann's third season at Ohio State. Success marked his time at Butler and Gardner-Webb and the plan is the same with the Buckeyes. 2018 was a great year for the new coach as he was able to finish 25-9 overall, 2nd in the Big Ten Conference, with a second round finish in the NCAA tournament. He was named Big Ten Coach of the Year. Last year was not as good although the team did finish with 20 wins. The schedule for 2019 has been set and the Ohio State team is stacked with almost all the point scores from last year and a top 10 recruited freshman class. Ohio State should contend for a Big Ten title again and hopefully finish well in the NCAA.


Most noteworthy during a recent press conference was news that Just Ahrens missed time over the summer with a back injury, according to Chris Holtmann. His weight is a little bit down and his return is expected soon. Also mentioned was that Player Development coordinator Scoonie Penn has left the program for a job with the Memphis Grizzlies. Another famous Ohio State alum, Terence Dials, will be replacing Penn on the staff.

So, who is Terence dials?


Terence Dials Jr. (July 15, 1983) is an former American basketball player who played high school hoops for Boardman HS in Ohio. As a power forward he played college ball with Ohio State scoring over 1500 points while getting 875 boards. In 2005 he was the Big Ten Player of the Year. He has been playing professionally since 2006 for different countries outside of the United States including France and Switzerland.

Dials originally from Detroit, Michigan moved to Boardman, Ohio early in life and went to Boardman High School. There's a famous story from high school when the power forward broke a backboard during a group practice in secondary school. He was offered a scholarship to play for The Ohio State University and did not look back. During his four-years here, Dials played in 132 games. Dials went undrafted in 2006 in the NBA Draft.

People always chose different sportsmen as their ideal personality. That individual can either be footballer, cricketer, badminton player, rugby football player, or any other sports. Cade Stover is a player recently playing from Ohio State Buckeyes. He joined this club a few months back as an outside linebacker (OLB) that is an important position to cover. Stover has a height of 6 feet and 5 inches with 235 lbs. weight. He is no doubt one of the best players in this sport due to physique and technique. Let’s have a look at the more details about Cade Stover.

CadeStover is a 4-star player with extreme athleticism and agility to take over his opponents. The stats clearly show his recent performances as he has 178 tackles in this last season. Furthermore, Stover rushed for 1497 yards and he has 2 forced fumbles under his badge as well. He is not only a consistent performer, but the head coach of Ohio State said that “He is the game-changer irrespective of the possession”. He also won a title of Mr. Football by Ohio State in 2018.

Stover looks like a quarterback player with his height and weight but that’s not true at all. During his junior year, he used to play as a center. He completed 43 passes out of 104 attempts however it wasn’t an ideal position for him. He faced a minor injury in the interim of 2017 season, but he recovered soon. After that, he played on his recent position of an outside linebacker (OLB).

Stover has become 6th player (16th player overall) from the recruiting class of 2019 who is now officially a Buckeye. Stover was rated as No.7 outside linebacker (OLB) and No.114 overall player in the class. He lost his black stripe on 13 August 2019 with recorded 178 tackles out of which 92 are solo tackles. Moreover, he is the fifth defensive player who has won the Mr. Ohio Footballaward in 2018. Due to these reasons and improved position, the administration is looking forward to an overwhelming 2019 season.

The lineup of linebacker for Buckeyes is quite complex as they have eight returning players. Therefore, future opportunity and survival as a linebacker are difficult for three new linebackers including Stover. He is an exceptional player with explicit skill-set who can perform in any situation and he can make his mark quickly. If he joins as a linebacker, there will be two senior LB in front of him with a ton of experience and enhanced skills.

Another problem for Stover is that Ohio State has recruited three linebackers in the last three years of classes. He won’t be getting enough chance as permanent linebacker until he is a senior player with extended expertise. However, the best trait of Stover is his versatility as he can play any of the LB position. It is not essential for him to join as No.1 central linebacker to have a look at the field. He just wants to be on the field among three best linebackers. If he is given consistent chances, he will eventually win the hearts of coaches soon and might replace a senior player.

Kendall Sheffield to Work Out for Scouts from the NFL 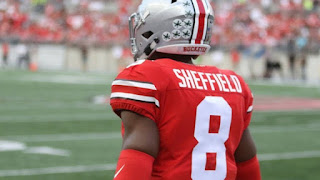 Kendall Sheffield will get his opportunity to demonstrate his speed and aptitudes to NFL scouts before one month from now's NFL draft.

In the wake of persevering through a mostly torn pectoral muscle in the press at the NFL Scouting Combine, shielding him from checking out on-field practices at both the combine and seven days back's Ohio State day, Sheffield will be sufficiently strong to encounter a pre-draft practice for NFL scouts at Ohio State on April 11 – just two weeks before the first round of the NFL draft – according to a report by NFL Network's Ian Rapoport.

While Sheffield's own activity likely won't move nearly the swarm of NFL capacity evaluators that went to seven days back's day, any team that is really considering drafting him will presumably send an agent to Columbus to see how the corner-back has recovered from his harm and precisely how snappy he is.

Sheffield consumed two seasons at Ohio State in the wake of moving from Blinn Community College. Leaving school in Missouri, Texas, Sheffield was a five-star player and went with Alabama. He experienced one season with the Crimson Tide in 2015 anyway did not play and after that moved to Blinn. Sheffield was recorded as the top junior school cornerback in the country in the 2017 class according to the a recruiting composite.

At the point when a Buckeye, Sheffield promptly worked his way into his turn at corner with Denzel Ward and Damon Arnette. In that first season, Sheffield played in all of the 14 matches for the Scarlet and Gray and finished the season with 40 total take-downs. After Ward announced for the NFL Draft, Sheffield was one of the top corners on the chart for Ohio State in 2018. The season did not go similarly not surprisingly in any case, as the Buckeyes allowed more than 245 yards for every match through the air. Sheffield finished the season with 35 hard and fast tackles, two for a setback and two catches in 14 games.

Sheffield is seen as one of the speediest players in the 2019 NFL draft – as displayed by his record-breaking spell on Ohio State's indoor track gathering – and now he'll get the chance to moreover show it by running the 40-yard dash and encountering other athletic tests similarly as position drills.
Posted by Steve Patterson at 11:38 AM 0 comments