Rashod Berry Becomes a Member of the 2015 OSU Class 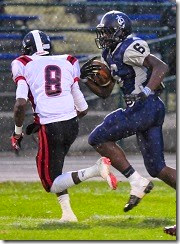 The 19th member of Ohio State’s 2015 class committed today, Rashod Berry of Lorain Catholic. Berry received an offer yesterday and did not take long to make up his mind. He’s a three star defensive end ranked 65th nationally by Scout.com. 6’4” and 235 lbs. He joins Jashon Cornell and Dre’Mont Johns are DEs in the class.
Berry met with Urban Meyer during the bye week and impressed the coaches that were on hand at a practice. He didn’t receive an offer right away from his film but the in-person appearance made a difference. He also had offers from Akron, Iowa, Bowling Green, Indiana, Illinois, and Kent State to name a few. His leaders before make a decision were Ohio State, Michigan State, and Iowa.

Posted by Steve Patterson at 10:45 AM 0 comments