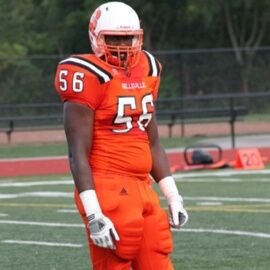 Devontae Dobbs, the five star offensive tackle, will visit the Buckeyes on Saturday. The top rated OT will attend one of Ohio State's biggest matches this season.

Now that Wednesday has arrived, it is only a few days until the number two Ohio State faces the number five Oklahoma Sooners, for a battle of teams ranked in the top five.

Urban Meyer has already held his press conference for the week, and given his thoughts about the match. However, as the student/athletes and coaches get ready for the match, there's another contest to be fought: recruitment. A plethora of talent will descend on Columbus at the weekend, and this includes the number one OT in the class of 2019.

A Match Between the Best Schools Attracts the Best Talent

Devontae Dobbs, the five star offensive tackle (Belleville, MI) has been on the radar of the Buckeye's recruitment scouts. The prospect for 2019 attended the Friday Evening Lights event held by OSU in the summer, and Ohio State have been competing with Michigan Wolverines to snag the prospect.

Bill Kurelic  wrote an article confirming that Dobbs will attend the Saturday match. For Ohio State, this is extremely significant news. Urban Meyer's team has its' first opportunity of the season to speak with the number one Michigan prospect. All being well, Meyer and his team will make some progress at the college football season's biggest match. After the visit is over, we will keep you updated about any news regarding Dobbs and Ohio State.