The Rocky Road to the Los Angeles Kings Championship 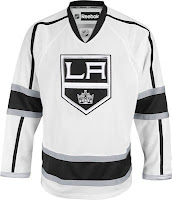 First suiting up in royally themed hockey jerseys of purple and gold, the Los Angeles Kings were one of six expansion-era teams to supplement the Original Six franchises in an effort to stifle the growth of competitive leagues, such as the Western Hockey League. Though the team's record has been inconsistent and generally mediocre through its history, it nonetheless has boasted some of the most dynamic names in hockey and has contended for the Stanley Cup by advancing to the playoffs 24 times.

The Kings busted out of the gate in their early years, making the playoffs in their first two seasons and earning a home winning record during the first - the only expansion team to do so. Unfortunately, affairs took a turn for the worse in the following seasons as the Kings found themselves on the wrong side of several trades, along with poor drafting.

With light at the end of the tunnel, the Kings began to develop a team identity as a defense-first team and soon became the most effective defense in the league; compounding this development was the acquisition of the spectacular goaltender Rogie Vachon, and a few years later, generational superstar Marcel Dionne, who centered the "Triple Crown Line" alongside Dave Taylor and Charlie Simmer, both relative unknowns until this dynamite combination developed into one of the highest-scoring lines in the NHL. Playoff success was more frequent during his decade-plus tenure, but the team was unable to eliminate more than one team a year and advance to the Conference Finals.
Unbelievable Gretzky Trade
The hockey world and especially Canadians were stunned to hear that Wayne Gretzky, fresh off of four straight Stanley Cup championships at the helm of the Edmonton Oilers, had been traded to the Los Angeles Kings; the primary consideration traded in return was millions of dollars. Gretzky joined a respectable group of NHLers headed by emerging star Luc Robitaille and Bernie Nicholls, and the addition transformed the team into a dangerous contender. The gimmicky colors of the past were replaced with sleek black and white hockey jerseys, and the symbolic change transferred to the ice where the Kings set team records in the regular season and played respectable playoff hockey; however, they were ousted by Gretzky's former Oilers. Finally, the 1993 playoffs saw the Kings advance to the Finals and nearly clinch their first cup, only to be easily dispatched in five games.

Bankruptcy and a depleted roster plagued the Kings for a decade after their near-miss, with poor management and coaching decisions resulting in a revolving door for these positions. Franchise players like Wayne Gretzky. Jari Kurri and Rob Blake, as well as raising star prospect Olli Jokinen were sent to other teams, but over time they were replaced by solid draft picks like Alexander Frolov, Lubomir Visnovsky and Michael Cammalleri.

During the post-lockout era beginning in 2005, the Kings iced a struggling team while in the middle of a rebuilding process. The next several seasons saw promising young prospects earn spots in the line-up and become the eventual foundation. Anze Kopitar, Dustin Brown, Mike Richards, Drew Doughty, and goaltending prodigy Jonathan Quick took the team by the reins and established the Kings as a playoff-bound team. Throughout the 2011-2012 season, they rose and fell in the standings and squeaked into the post-season as the bottom seed, however amazing performances throughout the rosters sent the team into a higher gear which demolished opposing teams and culminated in the first Stanley Cup victory in franchise history. Scarily, the team still has room for improvement and looks to contend for years to come.
This post was written by a guest blogger at Sports Jersey Canada - NHL Jerseys.  To check out our latest collections of hockey jerseys, click here.

Posted by Steve Patterson at 9:58 AM