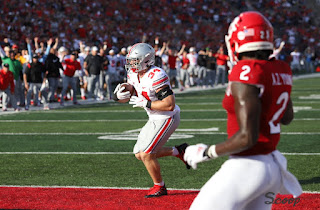 Mitch Rossi's Touchdown Reception Is The Fruition Of Years Of Effort

And, while it was only one of many Buckeyes goals on the day, it meant a lot to Rossi and his family.

Rossi walked on to the program in 2017 and spent years in a limited role on offense and special teams. He was offered a scholarship before the 2021 season began, and he was given even more after the play in the end zone was called for him.

In four years with Ohio State, he has recorded 12 receptions for 146 yards and has scored one touchdown.

When he was a kid, Mitch Rossi’s father, Tom, began taking him to football practice. There, he would catch tennis balls tossed by his father. His parents are from the Tiffin Ohio area and he grew up a fan of the football program. When his teammate Max Wray received a scholarship to the school, he tagged along.

Posted by Steve Patterson at 7:08 PM