They say that nature always finds a way to balance things out. Every creature has its natural predators, and if you are at the top of the food chain, you better not eat all your prey before they get a chance to breed. Every time it looks like the human race is spiraling out of control, along comes a leveler, be it war, famine or the Black Death...

Well, from the look of the ever more crazy stunts kids are pulling on the streets & skate-parks of the world, it seems humanity has discovered a great way to thin its numbers and ensure that teenagers don’t upset the delicate ecological balance of our urban environments. Every cracked head is one less loud-mouth to feed, right?

Unfortunately for those who see teenagers, rebellious 20 & 30-somethings, and the odd middle-aged arthritic skate fanatic as a threat to life as we know it, the skater has evolved some remarkable survival strategies. Ok, this weird wheel-based human sub-species don’t yet have organic air-bag glands that inflate on impact. They don’t yet sport Beetle-style armoured exoskeletons. Skateboarders can’t utilise their inner gases to propel themselves to safety in the event of a wipe, yet. 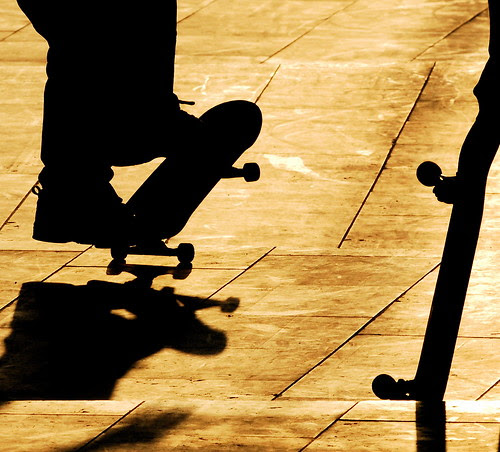 How to skate safe

So skate-boarders bodies haven’t evolved and adapted to their sport yet? After what, 50 years of natural selection? Pathetic – I thought us humans were meant to be adaptable! Actually the secret here is the same secret that has allowed homo-sapiens to adapt and survive the harshest conditions our planet has to offer – tools and technology!

Astronauts don’t go spacewalking without some serious hardware, and yes you guessed it – serious skaters don’t go sky-walking without the right gear. It’s not all about pads & helmets. Even the basic elements of skater style reveal that there is method behind the madness. Take skate shoes for example; that ‘big’ over-sized looking upper and the fat laces. It’s actually a very good idea to wear proper, fat padded skate shoes. Your feet are really vulnerable when skating, liable to be trapped under your board, stomped on, landed on wrong, and generally beaten about. Even the Converse shoes that have been popular with skaters since the 70’s are actually a cunning safety move. The high Converse ankle supports you well, and the rubberised sole sticks to your board - and whatever you are tricking off - like glue. 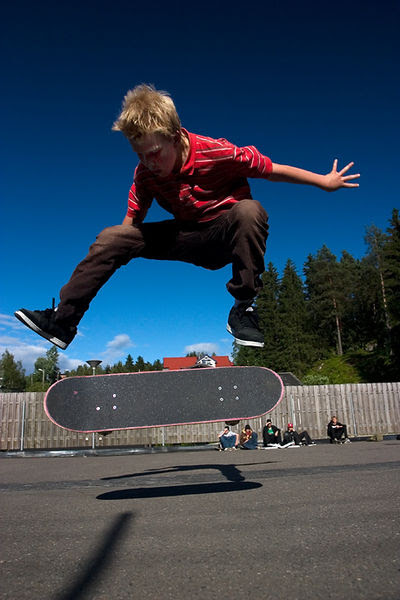 Skaters have been wearing jeans since the early days, and this tradition has barely slowed today. If you rewind back to the invention of denim in the days of the cowboys, it was made in response to the needs of working men in dangerous environments. Coming off your horse, chasing cattle, fighting pistol wielding villains... all this called for a hard-wearing cloth better than anything before it. Denim could withstand friction and protect your legs- and stuff!- better than the soft cotton and linen everyone wore before. Modern skaters wear jeans from cool modern designers for the same reasons.

Although you see many young, confident or just plain foolish skaters performing dangerous tricks with naked heads, a helmet is really the pro way to go. Pulling off a fakie-to-fakie 900 isn’t all that cool if you fall and end up a crippled vegetable on your next run. If you are serious about your skating and your future, Bern helmets offer some of the best protection, and do it with style.

Finally, we come to the pads. As a general rule, you need more of these the older you get, and you also need more of these the bigger your tricks get. Protec helmets also produce some incredible protective gear for most parts of your body, including some truly awesome bodyguards that look like they were designed for a sci-fi super soldier.

Trudy is a writer, mad-for-it skater and fashion freak from Brighton UK. She loves writing about skating, fashion and culture through the ages, and has a serious Converse shoes problem. Her latest equipment dilemma involves the difficult decision of choosing between Bern helmets and Protec helmets - which looks cooler? Argh!

Posted by Steve Patterson at 10:36 AM