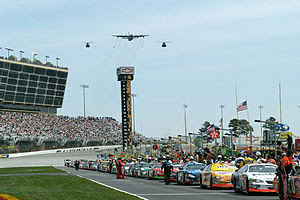 The Nascar All-Star race, known then as the Winston, began in 1985. It was held at The Charlotte Motor Speedway in Charlotte North Carolina. The race has been run there every year since, except for 1986 when it was run at Atlanta Motor Speedway. There were twelve race winners from the 1984 season that participated in the 1985 Winston race. The race was held the day before the Coca Cola 600, and was seventy laps with one pit stop mandatory.

The inaugural race was won by Darrell Waltrip.The second running of The Winston was in Atlanta and the crowd was skimpy. There were only a measly 18,500 in attendance, possibly due to the fact that the race was held on Mothers Day weekend. This weekend was one that was, up to that time avoided in the race calendar. In 1987 the race returned to Charlotte with many changes. The race was now held the weekend before the Coca Cola 600. This would give most race teams two weeks at their home track, as most shops were located in the Charlotte area. The format changed for the 1987 race and for the first time the race was carried on ABC. The race continued to expand and refine and in 1992 The Winston was the first superspeedway race held under the lights. The race itself was thrilling with Kyle Petty and Davey Allison crashing as they crossed the finish line. Davey Allison won the race, but didn't know it until he regained consciousness in the hospital. Running the race under the lights was electric, and the fans loved it.

Nascar expanded on it until now in 2011 there will be eleven races run under the lights. Nascar continued to fine tune the race making changes in the format, how drivers were picked, and the name. What had started as the Winston in 1985 now became the Nascar Nextel All Star Challenge in 2004. In 2008 the name was changed again to the Nascar Sprint All Star Race. The race format over the years has changed, but one thing remains the same this race is truly "One Hot Night". The drivers are awarded no points but there is a significant money prize for the winner. It is also a chance for drivers to let go, and they often do so. There are frequent crashes, and sometimes half of the starting lineup does not finish. Nascar's history is rich and storied, and Charlotte has played a large part of that history. In 2010 the Hall of Fame Induction Ceremonies were held during the All Star Race Week. With innovation and changing formats the Nascar All- Star race continues to be a fan favorite, and is always "One Hot Night".

Are you looking for cheap insurance for your automobile? Go to Kanetix today and do a free quote comparison to see which insurance company in Canada offers the best rate of insurance. Kanetix compares the rates of over 40 insurance providers in Canada.

Posted by Steve Patterson at 2:11 PM