A Great Olympian Let Down 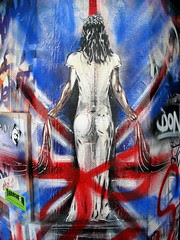 Who else is feeling completely underwhelmed by what is supposed to be the biggest event in recent British history? No, I'm not talking about the royal wedding, though I'll admit that the excitement surrounding Pippa Middleton's unremarkable behind suggests that the British public felt a similarly damp spark.

No people, I'm talking about the Olympics. I'm so bored by the inane faux-excitement that I'm even thinking of taking a cycling holiday next July just so I can actually do some exercise rather than watch other people do it. 'Traitor!' I hear you shout. 'Kill joy!' you exclaim. Maybe I'm a bit of both, but there's just too much to hate about the whole thing.

Think of how we did in the World Cup in 2010: we think we're pretty damn good until we're confronted with the genius sportsmen and women from just about every other country in the world and then realise we're rubbish. The worst thing is that we can't say that it's because they have more money to spend on training and facilities. No one's got any money! Hurrah!

No, we just have to admit that while we're good at important things like wearing hats, genteel walking holidays in the Lake District and electing poor heads of state, in the sports department we're just like the nerd who gets picked last for the basketball team. Tim Henman, bless his tennis whites for trying, was a regular disappointment. This is not to diminish his achievements: he's better at tennis than 99.9% of the world's population – a sexy statistic if you're Tim – but the public and the media all too easily forget their own mediocrity and joyfully massacre this poor bloke's career. If he's not grand slamming willy-nilly at Wimbledon, he's basically as impressive as Wayne Rooney's hair transplant.

I used to get a thrill out of being able to give (fake) directions to flabby German tourists. Now, I can't even be bothered to think up a lie because it takes up valuable commute time – I just push past them angrily to make sure that little old lady isn't the one getting the last seat on the tube.

During the Olympic summer, you can guarantee that every tired and unenthusiastic Londoner will be asked for directions every single day, ensuring that 10 minutes’ walk to the tube becomes 11 minutes, and that extra minute is enough to miss that all important connection at the end of a trying day. Thus, I predict an increase in commuter breakdowns of at least 5%, enough to push the NHS over the edge and into an even more disorganised state. Not good for treating tourists who have injured themselves after being inspired by the wrestling event.

3.British incompetence being advertised to the world

It's ok for us to make fun of ourselves, indeed, it's a vital part of the British psyche to whinge about how rubbish the UK is: the food, our film industry, schools and most of all, our attitudes. It is all a complete joke. However, the Olympic fiasco-in-the-making will give other countries a chance to point and laugh mercilessly at our awful attempts to create a world class event with world class culture hosted by world class people. Boris Johnson's hair will be beside itself with excitement, and will start shouting out obscenities during the opening ceremony. Suddenly, Silvio Berlusconi's Bunga Bunga parties will look like an attractive alternative event for the Italians coming to see the show.

Bemused tourists will arrive in Stratford, hoping for a bit of thespian action alongside the Olympics – what they'll get is a neighbourhood Londoners pass through as quickly as possible. And finally, chic and experimental sculptors from Canada will look at the ArcelorMittal Orbit and quite rightly wonder why we've created something that looks like a python getting it on with a trumpet.

Suri enjoys travelling, photography and writing, but definetly not the idea of the olympics!

Posted by Steve Patterson at 11:19 AM