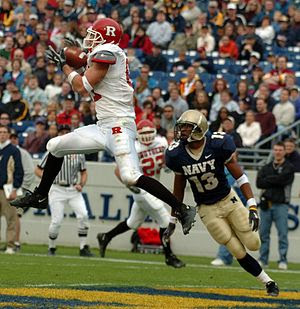 Welcome to the September 29, 2011 edition of Sports Carnival Ecstasy.In this episode we have some 39 different stories from many great blogs. Rose starts us off with a look at the Rutgers Scarlet Knights. We have the 10 Most Shocking Sports Tragedies of All Time from Katie Gilbert. Lisa Hood stays with college football and reports the 10 Football Freshmen to Follow This Fall. Finally we have two articles by Steve including What have we learned from the first 2 weeks of the NFL and The Future of College Football, Super conferences. Hope you enjoy all the material, bookmark, share, tweet, like on Facebook, and come back next time.

Steve presents Santa Pod Hosts European Drag Racing Finals posted at FryingPan Sports, saying, "For most normal people in the British Isles, chugging to the shops in something dull, the idea of drag racing conjures up images of glamorous Yanks, sun-drenched desert airfields and blingin’ USA style showmanship, as ridiculously powerful nitrous-methane fuelled drag cars launch their sacrificial pilots into mind-numbingly fast races which are over in seconds."

Michael Donelly presents The most Efficient combination: Anaerobic and Aerobic training posted at www.anotherway.org, saying, "Read this if: You want to achieve fitness results effectively taking advantage of the latest methods in fitness training. The latest findings reveal that you are more likely to lose body fat and build up muscles if you combine aerobic exercises with anaerobic ones. Another interesting fact is that experimental and observational research show that aerobic exercise and resistance training contribute to the maintenance of functional capabilities during aging."

Michael Donelly presents Weight is not the Problem: Fat is! posted at www.anotherway.org, saying, "Gain: a life-time strategy to maintain good-looking and healthy body.

Cost: about 2,5 hours per week training and some money for home sports equipment or gym cards depending on your preferences and budget."

Katie Gilbert presents 10 Most Shocking Sports Tragedies of All Time posted at Best Online Colleges.com, saying, "Sports, though an escape, encapsulate the human condition, and those who follow them closely know that players aren't immune to the same randomness, unpredictability and personal issues we face in our lives."

Steve presents Djokovic Wakes up from 2011 Dream Season posted at FryingPan Sports, saying, "Coming off his incredible win over Nadal in the US Open tennis final, Djokovic was unable to complete his Davis Cup match due to a lingering back injury."

Steve presents How Many Different Competitions Are Part of An Olympic Pentathlon? posted at FryingPan Sports, saying, "The modern pentathlon is composite event which tests the endurance, strength, timing, precision and skill of an athlete."

Steve presents The Barclays ATP World Tour Finals 2011 posted at FryingPan Sports, saying, "The draw isn’t like a normal tournament, instead it begins with round robin play that eliminates half the field."

Michael Donelly presents The Difference Between Good and Bad Exercise posted at www.anotherway.org, saying, "Gain: Toned body and other significant health benefits without damaging your joints

We all know that physical activity and doing sports is healthy. The Department of Health and Human Services (HHS) released its new Physical Activity Guidelines for Americans, calling for adults between the ages of 18 and 64 to exercise moderately. The positive effects of physical exercises are numerous..."

Tina Marconi presents 10 Indoor Sports Kids Can Play posted at Babysitters, saying, "After a day or two of being stuck indoors, kids often need a way to burn off some of the energy that they normally use up in outdoor play. Here are 10 sports activities that can be adapted for inside the house."

Steve presents This Weekend: Ohio State Buckeyes v University of Miami Hurricanes posted at BrutusReport, saying, "Nationally ranked (17) Ohio State University, with new coach Luke Fickell at the helm, is slated to play at the University of Miami this weekend. Both teams have been under the microscope this season, amidst controversy involving NCAA infractions."

Steve presents Eagles Looking Strong in 2011/2012 posted at FryingPan Sports, saying, "Preseason is over, but the war has just begun. Football fans have been coming out of summer hibernation to support their favorite teams with fervor, body paint, beer, air horns, and dreams of the Super Bowl dancing in their heads. Many teams are already proving their worth in the pre-season, and the Philadelphia Eagles are one of them."

Steve presents My Fearless League Predictions posted at FryingPan Sports, saying, "It is time again for my fearless attempt (note: no dart boards were injured during this exercise) to predict the outcome of the 2011 NFL Season. I know that some of you will doubt my crystal ball but it seldom fails me (except when it needs repair which happens around this time every year)."

Steve presents Ohio State Buckeyes v Miami Hurricanes 2011, Questions I Have posted at BrutusReport, saying, "Watching the game on Saturday was difficult as Buckeye fans are used to seeing Ohio State compete with the exception those two horrible NC games when they didn’t show up in 2006 and 2007."

Steve presents Who Holds the NFL Single Season Rushing Record? posted at FryingPan Sports, saying, "A great running back that defenses must game plan for week after week and still can’t be stopped is as formidable in 2011 as they have been throughout NFL history."

Steve presents What have we learned from the first 2 weeks of the NFL? posted at FryingPan Sports, saying, "The Bills are 2-0 but had to pull a miracle to win vs. Oakland. They are not as good as they looked last week vs. KC because the Chiefs are TERRIBLE. They face the Pats this week."

Steve presents Ohio State 2012 Commit Bri'onte Dunn Discusses 2011 Preparation posted at eFilmRoom, saying, "In this nice interview of Bri’onte Dunn prior to the 2011 season, he discusses what GlenOak needs to do to be successful this year."

Steve presents Ohio State Takes Colorado with Turnover Free Play posted at BrutusReport, saying, "The 37-17 win gives the Buckeyes some confidence as they head into conference play against Michigan State this coming week."

Steve presents Super conferences: The Future of College Football posted at BrutusReport, saying, "Unfortunately, college football is taking a new direction this year, and next year traditions and rivalries might disappear altogether."

Steve presents Ohio State to Face Michigan State Saturday in Ohio Stadium posted at BrutusReport, saying, "The Big Ten conference is beginning for the 3-1 Buckeyes this coming weekend with a visit from 3-1 Michigan State."

Michael presents Canton GlenOak RB Brionte Dunn Looks Around posted at eScoutRoom, saying, "At 6’2” 215 lbs, he has great size and speed that reminds many of Chris ‘Beanie’ Wells who excelled in his time at Ohio State at tailback."

Steve presents Six Golfing Swing Tips posted at FryingPan Sports, saying, "This is a quick guide to a super swing and a satisfying session of the sport, golf."

Steve presents A Look At The Fiat 500 posted at FryingPan Sports, saying, "Quite honestly, the first impression, based on these ads was not particularly favorable. It looked like just another toy car doomed to quick extinction by American tastes for big and bigger."

Posted by Steve Patterson at 2:15 PM